This week we have been poets and scientists.

A busy week as always!  We have been reading a range of poetry by traditional and modern poets.  We thought about what impression Robert Louis Stevenson gives in his poem 'From a Railway Carriage' and we made predictions about what creature is described in Lord Tennyson's poem 'The Eagle' (before the title was revealed!).  We also read 'Don't' by Michael Rosen and practised performing it in small groups (which you can see in the top photo).  Inspired by Michael Rosen, we wrote our own 'Don't poems'.   Some of our favourite child-written lines are 'Don't put bananas in your pyjamas!' and 'Don't put tar in your car!'.

If you think that's not enough for one week, we have also been super scientists.  We investigated the question 'Is there a pattern between height and foot length?'.  We used a range of scientific skills such as predicting, measuring accurately and suggesting reasons.  Below you can see some of 4T measuring their height and feet! 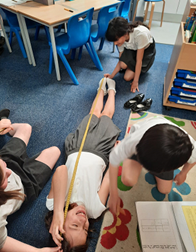 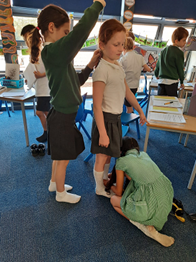 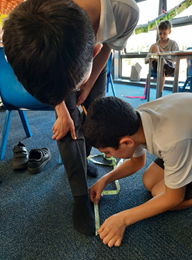